The debate on immigration 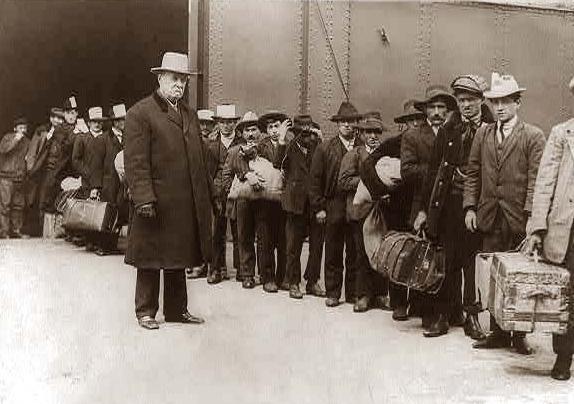 Immigration has become a heated topic lately, and it is always a complicated one. With many different viewpoints on the economics and ethics of the issue, along with many seemingly contradicting facts, it is hard to create a hard, set view on immigration. Many countries have different stances - for example, Germany has a very open immigration policy and in the past has taken in too many immigrants at one time. Israel, however, has a very closed immigration policy and hasn't taken in many immigrants at all. The United States, though, has leaned toward a looser stance in previous presidential terms, and is now leaning toward a completely closed off policy - so which path should we take? With the United States bringing in 8.3 million immigrants (legal and illegal) between 2008 and 2014, the main question is: Who should we let in if we choose to let anyone in at all?

Politically, immigration is a very sensitive topic. Support for different immigration solutions is extremely partisan. On the left wing, there is broad support for a path to citizenship for immigrants here illegally, while the right tends to be strongly against any such path. However, that is not an absolute binary. Across the aisle, anti-immigrant sentiment is decreasing, and there is broad support for legal, skilled immigrants. Even in the district of the conservative firebrand Steve King, many people agree that hispanics are an important part of the community. “Some of these kids were born in the U.S.,” said one supporter of Mr. King. “These families had lived here 10 years, and all of a sudden, Dad’s gone, Mom’s gone. When you think of it from that perspective, what’s the lesser of two evils?” The political debate, though, is what to prioritize in accepting immigrants. The conservative position tends to favor high skilled immigrants, whereas liberals tend to prefer maintaining the current status quo of prioritizing family connections for citizenship.

A major reason for political disagreement is that the left and right do not share the same assumptions about the purpose of immigration. The left wing generally argues that we have a responsibility to accept people in need from war torn or unstable countries, whereas the right generally believes that immigration is to serve our nation, and that we should be accepting immigrants who will strengthen our nation. And despite agreement on some issues, both sides are becoming more polarized. On the left, support for “sanctuary cities,” or cities that will not cooperate with federal immigration enforcement runs high. On the official website of the democratic party, democrats.org, they tell us “We will not stand by and watch families be torn apart — Democrats in Congress and in states and cities across the country are already standing up to Trump’s hatred and bigotry to defend their immigrant neighbors.” And on the right, of course, are the calls from our president to build a wall along our southern border.

While there tends to be a fair amount of bipartisan agreement about some immigration issues, political polarization is a major obstacle to any implementation of immigration solutions.

Experts disagree whether the economic impact of low-skilled immigrants on the economy is positive or negative American citizens. Some believe that immigrants create a net positive impact. Several industries, such as construction, farming, and food services, need many low-skilled positions filled that American citizens are simply not willing or able to apply for. As a result, these industries depend on immigrants to provide the much-needed labor, which they wouldn’t be able to obtain otherwise. Economies, Adam Smith argued in “The Wealth of Nations,” work best when workers become specialized and divide up tasks among themselves. It is also argued that, through spurring economic growth by purchasing goods and services from businesses, and through starting their own, immigrants increase the size of the economic pie, boosting growth and overall prosperity, and are as not as dependent on the government services that would take away from that pie as some observers believe. According to the Economic Policy Institute, "For the United States as a whole, immigrants’ share of total output was about 14.7 percent over 2009–2011." Others say that immigration's negative impacts outweighs its benefits. These economists state that “an average illegal immigrant household costs taxpayers $14,387 yearly”, impacting everyone through draining the government's capacity to provide public services. Opponents of increasing the flow of low-skilled immigrants believe that an influx of low-skilled labor would contribute to unemployment and lower wages in areas where they compete with native-born workers for jobs. High-skilled immigrants, they argue, are more likely to start businesses and are less dependent on public services when they first come in, and so should be prioritized more to spur economic growth.


Employment and economic growth are not the only things people are concerned about in the immigration debate. Humanitarian issues, too, are of much concern. Many immigrants attempting to reach the United States are fleeing extreme poverty and gang violence in Central America or civil war in countries like Syria or Yemen. The United States is for  many their last hope for a better life. Some argue that this obligates us as a more fortunate nation to open our doors to those that need it most, instead of the most capable workers, and that the security threat posed by refugees is very small. Others disagree, believing that a government should put its own citizens first, arguing that possible security and economic threats from refugees make accepting them detrimental to the physical and economic security of United States citizens, as well as a potential drain on public services, and thus detrimental to the purpose of the United States government, which is to benefit its citizens.


What should be done about illegal immigrants? Is it our responsibility to house immigrants? Do immigrants generally help or hurt the economy? Immigration is a major concern in today's politics - so where do you stand? How will you take action? How can you be sure you are getting the correct information with all the contradictions in “facts” from different sources? With a topic that involves the life of others, there can never be one right answer.

Want to learn more? Click on one of these below